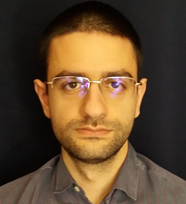 Born in Turin (1987), he has studied Philosophy at the University of Turin and he obtained his master degree in 2013, defending his thesis on “William of Ockham and the infinita in actu” (supervisor Prof. A. Corbini). Currently he is a doctoral researcher of both the KU Leuven Faculty of Theology (2013) and Fscire (2014), writing under the supervision of Prof. W. François and G. Ruggieri.

Description of my interests

Antonio’s research primarily concerns the study of the so-called “Golden Age of Catholic Biblical Scholarship in Leuven and Douai (1550-1650)”. In particular, he analyzes textual critical works, commentaries on the Bible and sermons by Leuven and Douai biblical scholars (John Henten, John Hessels, Nicholas Tacitus Zegers, Adam Sasbout, Cornelius Jansenius of Ghent, Francis Lucas of Bruges, Thomas Stapleton) to show their ideas on the ‘crux’ of the post-Tridentine theology: the relation between eternal predestination, temporal grace and human free will.