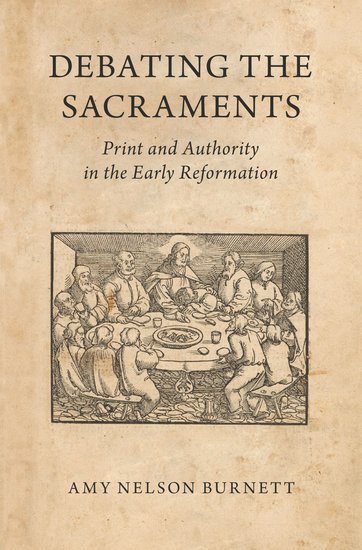 In Debating the Sacraments. Print and Authority in the Early Reformation (Oxford University Press), Amy Nelson Burnett brings together the foundational disputes regarding the baptism and the Lord’s Supper that laid the groundwork for the development of two Protestant traditions – Lutheran and Reformed – as well as of dissenting Anabaptist movements.

Burnett places these disputes in the context of early print culture, tracing their development in a range of publications and their impact on the wider public. Burnett examines not only the writings of the major reformers, but also the reception of their ideas in the pamphlets of lesser known figures, as well as the role of translators, editors, and printers in exacerbating the conflict among both literate and illiterate audiences.

Following the chronological unfolding of the debates, Burnett observes how specific arguments were formed in the crucible of written critique and pierces several myths that have governed our understanding of the sacramental controversies. She traces the influence of Erasmus on Luther’s followers outside of Wittenberg and highlights the critical question of authority, particularly in interpreting the Bible. Erasmus and Luther disagreed not only about the relationship between the material world and spiritual reality but also on biblical hermeneutics and scriptural exegesis. Their disagreements underlay the public debates over baptism and the Lord’s Supper that broke out in 1525 and divided the evangelical movement. Erasmus’s position would be reflected not only in the views of Huldrych Zwingli and others who shared his orientation toward the sacraments but also in the developing theologies of the Anabaptist movement of the 1520s.

The neglected period of 1525-1529 emerges as a crucial phase of the early Reformation, when evangelical theologies were still developing, and which paved the way for the codification of theological differences in church ordinances, catechisms, and confessions of subsequent decades.