Edmond Richer and the Renewal of Conciliarism in the 17th Century 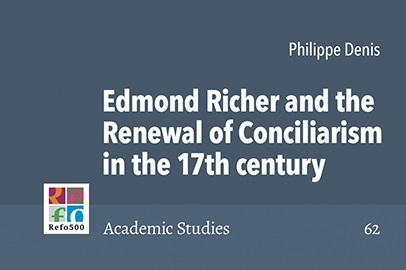 New volume in the R5AS series: Edmond Richer and the Renewal of Conciliarism in the 17th century, by Philippe Denis.

In 1611 Edmond Richer, the syndic of the Faculty of Theology of Paris, published a short but incisive defence of the conciliarist doctrine under the title De ecclesiastica et politica potestate. He claimed that this doctrine had been almost uninterruptedly followed by the University of the Paris since the time of the Council of Constance in the early 15th century. Within two years, at least six Latin, French or bilingual editions of the treatise saw the light as well as an English and a Dutch translation. The book was condemned at a meeting of the French bishops in March 1612 and its author was dismissed from his position of syndic of the Faculty of Theology a few months later. He withdrew from public life but remained influential. He continued to write in defence of the conciliarist doctrine and the so-called liberties of the Gallican Church until his death in 1631. He vehemently opposed Cardinal Bellarmine’s doctrine of the indirect power of popes in temporal matters but never subscribed to the doctrine of the divine power of kings. Most of his books were published posthumously.

Philippe Denis retraces Edmond Richer’s career and examines his ecclesiological and political thinking. Without taking all the syndic’s opinions at face value, this volume commits itself to taking seriously Richer’s declared intention, which was to vindicate the teaching of the School of Paris and that of Jean Gerson in particular. Philippe Denis places the heated, sometimes aggressive, debates between Richer and his adversaries in the context of a double progression: that of the doctrine of an absolute monarchy, a form of government which had been developing since the troubles of the League, and that of the Ultramontane ideas, often disputed but supported with growing vigour, in France and elsewhere, in the context of the reception of the Council of Trent. 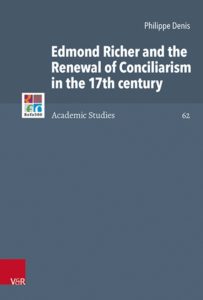