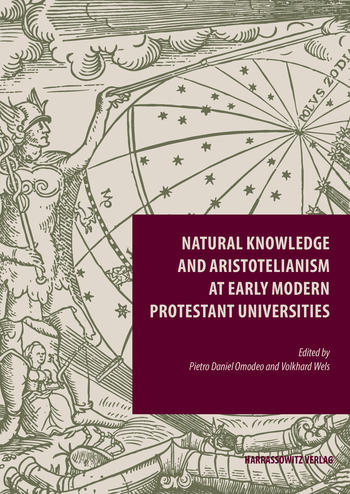 This volume aims to shed new light on the ways in which science was institutionalized and the central role played by university culture at reformed universities in the early modern period. It particularly explores the relationship between the Aristotelian legacy in Protestant centers of learning and the new natural knowledge which emerged from the mid-sixteenth to the mid-seventeenth century. Within the university context, Aristotelianism proved to be a dynamic tradition which we would term a ‘mobile episteme’ in line with the research program of the Collaborative Research Centre Episteme in Motion and the ERC endeavor EarlyModernCosmology (Horizon 2020, GA 725883).

The transformation of academic science depended on its circulation in institutional and intellectual networks. The transfer and exchange of knowledge always implied its reformulation and often its deep alteration as well, even in those cases in which the explicit intention of the historical actors was to preserve and secure a received canon of knowledge, such as the corpus Aristotelicum or the Scholastic style of thought. As a matter of fact, the cross-pollination between ‘early’ forms of knowledge and ‘modern’ perspectives produced changes of content, theory, and experience.

The fields that underwent major hybridizations and shifts range from astronomy to astrology, medicine, theories of the soul, alchemy, physics, and biology. Because methodologies were revised throughout this process, later instantiations of method, including rhetoric, epistemology, and theories of argumentation must be reevaluated within the terms of this transformative episteme.