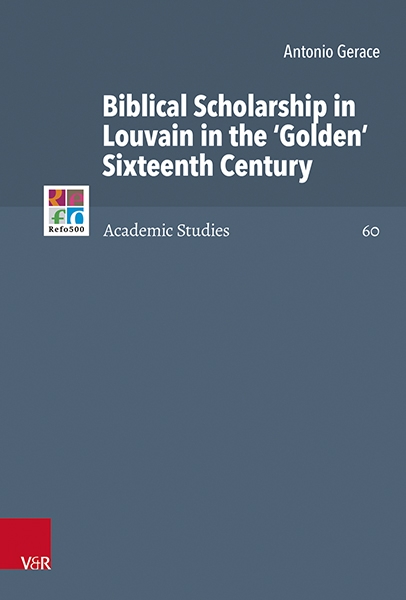 Antonio Gerace dealt with the development of biblical scholarship in Louvain by analysing with seven authors who worked in the first part of the Sixteenth century and who are strictly linked to the Louvain milieu. In chronological order, they include Nicholas Tacitus Zegers (c.1495–1559), John Henten (1499–1566), Cornelius Jansenius ‘of Ghent’, Adam Sasbout, John Hessels (1522–1566), Thomas Stapleton, and Francis Lucas ‘of Bruges’.

Each author offered key-contributions that can effectively show the development of Catholic biblical scholarship in that period. This can be divided into three main thematic areas: 1) Text-criticism of the Latin Vulgate; 2) Exegesis of the Scriptures; and 3) Preaching of the Bible. Somehow, these three areas represent the ‘study flow’ of the Scriptures: the emendation of the Vulgate, aimed at restoring the text to a hypothetical ‘original’, and the philological approach to the Greek and Hebrew sources allowing for a better comprehension of the Bible. Such comprehension becomes the basis of commentaries made with the intention of explaining the meaning of the Scriptures to the faithful in the light of the Tradition. Furthermore, the Church needed to preach the Scriptures and their contents to the Catholic flock in order to safeguard them from any ‘heretical’ influence. Therefore, several homiletic works appeared so that priests could prepare their sermons appropriately. Therefore, Gerace divided his work into three parts, each devoted to one of the three research areas, following the ‘study-flow’ of the Scriptures.