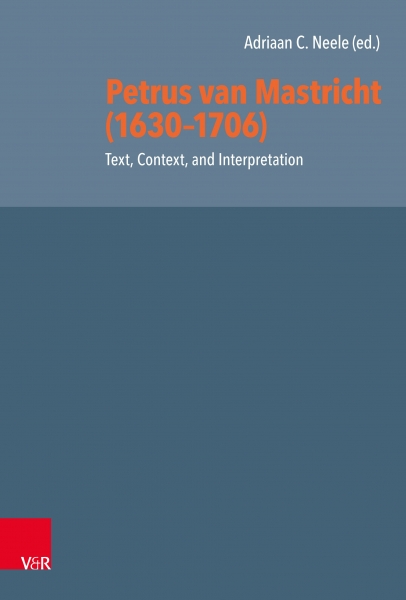 Edited by Adriaan C. Neele. Volume 62 in the Series 'Reformed Historical Theology'. This volume presents collected essays from scholars around the world on various aspects of Petrus van Mastricht (1630-1706) theology, philosophy, and reception in the context of the challenges of orthodoxy in his day. This book, then, locates Mastricht’s ideas in the context of the theological and philosophical currents of his day. The pre-Revolutionary status of theology and philosophy in the wake of the Enlightenment had many of the same problems we see in theology today as relating to the use and appropriation of classical theology in a 21st-century context. Ideas about the necessity of classical primary sources of Christianity in sustaining Reformed theology are once again becoming important, and Mastricht has many insights in this area. The last thirty years have witnessed a remarkable revolution in the study of Reformed Orthodoxy, that broad movement of theological consolidation which took place in the two centuries between the early breakthroughs of the Reformation and the reorganization of intellectual disciplines within the university world heralded by the arrival of the various intellectual and cultural developments known collectively as the Enlightenment. The old models which tended to prioritize one or two figures in the Reformation. In place of this older scholarship, we now have a growing number of studies which seek to place Reformed thinkers of the period in a much wider context. One of the results of this is that serious scholarly attention is now being directed at figures who were previously neglected, such as Petrus van Mastricht, a German-Dutch theologian, who has emerged as significant voices in shaping the Christianity of his day. He was the author of a major system of divinity. This work is in the process of being translated into English (two volumes are available at the time of writing). Mastricht is also the subject of a growing body of literature in English, of which this volume is a fine example. The essays contained in book work represent precisely the range of scholarly interests that the new approach to Reformed Orthodoxy has come to embody. Dealing specifically with the areas of theology, philosophy, and reception, this book points toward three critical areas of study.