News Tenth Annual RefoRC Conference on Early Modern Christianity | May 27-29, 2020 CANCELLED
RefoRC / Reformations in Hungary in the Age of the Ottoman Conquest
To overview 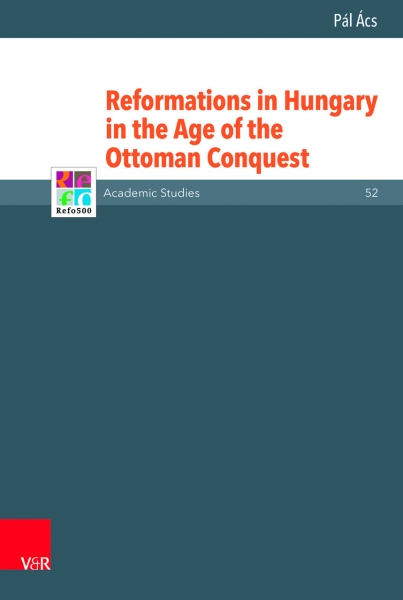 Reformations in Hungary in the Age of the Ottoman Conquest

Pál Ács, Reformations in Hungary in the Age of the Ottoman Conquest, Refo500 Academic Studies (R5AS) - Band 052. Pál Ács discusses various aspects of the cultural and literary history of Hungary during the hundred years that followed the Battle of Mohács (1526) and the onset of the Reformation. The author focuses on the special Ottoman context of the Hungarian Reformation movements including the Protestant and Catholic Reformation and the spiritual reform of Erasmian intellectuals. The author argues that the Ottoman presence in Hungary could mean the co-existence of Ottoman bureaucrats and soldiers with the indigenous population. He explores the culture of occupied areas, the fascinating ways Christians came to terms with Muslim authorities, and the co-existence of Muslims and Christians. Ács treats not only the culture of the Reformation in an Ottoman context but also vice versa the Ottomans in a Protestant framework. As the studies show, the culture of the early modern Hungarian Reformation is extremely manifold and multi-layered. Historical documents such as theological, political and literary works and pieces of art formed an interpretive, unified whole in the self-representation of the era. Two interlinked and unifying ideas define this diversity: on the one hand the idea of European-ness, i.e. the idea of strong ties to a Christian Europe, and on the other the concept of Reformation itself. Despite its constant ideological fragmentation, the Reformation sought universalism in all its branches. As Ács shows, it was re-formatio in the original sense of the word, i.e. restoration, an attempt to restore a bygone perfection imagined to be ideal.