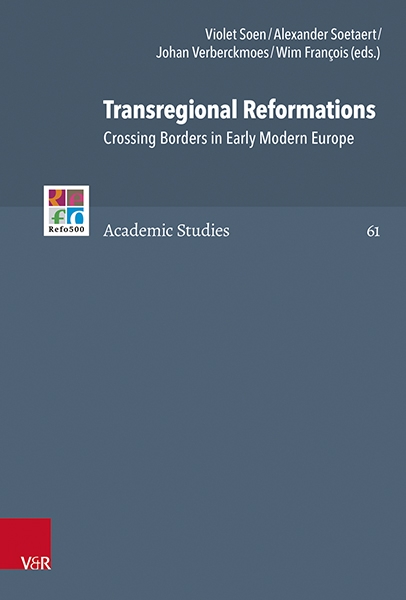 Transregional Reformations. Crossing Borders in Early Modern Europa, edited by Violet Soen, Alexander Soetaert, Johan Verberckmoes and Wim François. This volume invites scholars of the Catholic and Protestant Reformations to incorporate recent advances in transnational and transregional history into their own field of research, as it seeks to unravel how cross-border movements shaped reformations in early modern Europe. Covering a geographical space that ranges from Scandinavia to Spain and from England to Hungary, the chapters in this volume apply a transregional perspective to a vast array of topics, such as the history of theological discussion, knowledge transfer, pastoral care, visual allegory, ecclesiastical organization, confessional relations, religious exile, and university politics. The volume starts by showing in a first part how transfer and exchange beyond territorial circumscriptions or proto-national identifications shaped many sixteenth-century reformations. The second part of this volume is devoted to the acceleration of cultural transfer that resulted from the newly-invented printing press, by translation as well as transmission of texts and images. The third and final part of this volume examines the importance of mobility and migration in causing transregional reformations. Focusing on the process of ‘crossing borders’ in peripheries and borderlands, all chapters contribute to the de-centering of religious reform in early modern Europe. Rather than princes and urban governments steering religion, the early modern reformations emerge as events shaped by authors and translators, publishers and booksellers, students and professors, exiles and refugees, and clergy and (female) members of religious orders crossing borders in Europe, a continent composed of fractured states and regions.